Origins of the Seal of the State of Rhode Island

There is no official documentation from the time when Rhode Island first adopted the word "Hope" on its Seal and flag that explains why this word was chosen. The Rhode Island General Assembly first adopted a Seal for the colony containing an anchor with the word "Hope" above it on May 4, 1664.  The most coherent explanation as to the use of "Hope" comes from the historical notes of Howard M. Chapin published in Illustrations Of The Seals, Arms And Flags Of Rhode Island, printed by the Rhode Island Historical Society in 1930. On pages 4 and 5, Mr. Chapin wrote that the words and emblems on the Seal were probably inspired by the biblical phrase "hope we have as an anchor of the soul", contained in Hebrews, Chapter 6, verses 18 and 19.

The Charles I.D. Looff Carousel (also known as the Crescent Park Carousel) is the state symbol of American folk art. The Crescent Park Carousel is all that remains of a large Victorian-era amusement park, which gave way to suburban development in the 1970s. Today, the carousel is a park by itself, as it still attracts visitors throughout a good part of the year. The Looff Carousel at Crescent Park in East Providence, Rhode Island, is one of the few handmade carousels still in use. It was designed and built in 1895 by Charles I.D. Looff, a native of Denmark, who was one of the earliest and most important manufacturers of carousels. Still functioning on its original site more than 100 years later, the Looff Carousel is one of the surviving examples of a once common American folk art. Because of its cultural significance, the Crescent Park Carousel, nationally recognized as a true masterpiece of wood sculpture, was rescued in the 1970's by a handful of East Providence residents. It was placed on the National Register of Historic Sites and Places in April 21, 1976. In 1985 the Rhode Island General Assembly proclaimed the carousel as the "State Jewel of American Folk Art". In 1987, the Department of the Interior's National Park Service designated the carousel as a National Historic Landmark. A $1 million restoration effort was completed in 1995.

Arms of the State

The arms of the state are a golden anchor on a blue field, and the motto thereof is the word "Hope".

Coffee Milk is similar to chocolate milk but is made with coffee syrup. A coffee “cabinet” is coffee milk with ice cream (a coffee flavored milk shake). The main ingredient of this shake is "coffee milk," first introduced to Rhode Islanders in the early 1920's. Coffee milk became so popular in Rhode Island that in 1993 the Rhode Island state legislature voted coffee milk as the official state drink. It's called a “cabinet” because its originator kept his blender in a “kitchen cabinet.” Autocrat Coffee Syrup is the preferred syrup in Rhode Island. Autocrat of Rhode Island is a leading provider of premium coffee, syrup, and coffee extract since 1895.

The fish commonly known as the "Striped Bass" (morone saxatilis) is designated as the official state fish.

The flag of the state shall be white, five feet and six inches fly and four feet and ten inches deep on the pike, bearing on each side in the center a gold anchor, twenty-two inches high, and underneath it a blue ribbon twenty-four inches long and five inches wide, or in these proportions, with the motto "Hope" in golden letters thereon, the whole surrounded by thirteen golden stars in a circle. The flag shall be edged with yellow fringe.  The pike shall be surmounted by a spearhead and the length of the pike shall be nine feet, not including the spearhead. 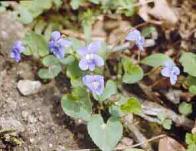 Developed in Rhode Island around 1796, greening apples retain their sharp taste in cooking. Their flesh is crisp and colored yellow-green.

The state mineral, Bowenite, is a close relative of jade and can be considered a semi-precious gem stone.  It is found in northern Rhode Island and was first discovered in the early 1800's by geologist George Bowen.

The State Rock is Cumberlandite. It is a heavy black or dark brown rock with white markings. It is found South of the Town of Cumberland on both sides of Narragansett Bay. It will attract a magnet, and is estimated to be between 1 and 1.5 billion years old.

The word quahog comes from the Narragansett Indian name: poquauhock. The quahog's scientific name, Mercenaria mercenaria, is derived from a Latin word meaning "wages." The Native Americans used quahog shells to make beads that they used as money (wampum).

The state of Rhode Island first started licensing vehicles in 1904. The first license plates were issued in 1904, were made of porcelain and featured black and white numbers with “Registered in RI.” The current standard issue plates feature the light blue wave on white background with dark blue numbers with the official plate nickname “Ocean State.”

Selection of the design began when Governor Lincoln Almond issued an order authorizing the Rhode Island State Council on the Arts to organize a Coin Concept Advisory Panel.  More than 500 design concepts were submitted to the panel, and three finalists were chosen.  Rhode Island residents were invited to vote for their favorite design at area libraries, the Statehouse and via the Internet.  The sailboat design was declared the winner, earning 57 percent of the 34,566 votes cast.

The release of the Rhode Island quarter completes the release of all of the commemorative quarters for the 13 Original Colonies and states.

The Courageous, one of the world's most distinguished yachts, raced in more America's Cup campaigns than any other yacht in history. Following the donation of the yacht to the Museum in 1997, Courageous was designated as Rhode Island’s State Yacht.  more (http://www.shgresources.com/ri/symbols/yacht/) 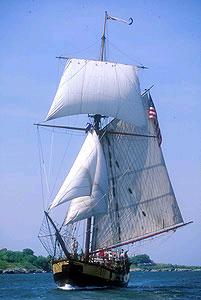 History comes alive aboard the Continental Sloop Providence! This 110' fully rigged sailing vessel is the faithful replica of John Paul Jones' first command. During her distinguished Naval career, the 12-gun Providence sank or captured 40 British enemy ships! She was a square-topsail-gaff-rigged sloop, the first ship commissioned into the Continental Navy and the first command of John Paul Jones. The new Providence is a replica built for the 1976 bicentennial. more (http://www.sec.state.ri.us/library/riinfo/riinfo/knowrhode) 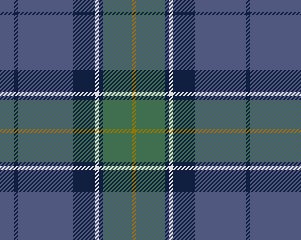 This tartan was created as a State tartan by the St Andrews Society of Rhode Island Inc. The Society was founded in 1923. Claire Donaldson of House of Edgar (Woollens) Ltd.

Rhode Island's it for me! Listen online...